I’m delighted that Shelly Terrell, one of the stars of the ELT blog-firmament, has agreed to write a guest-post for me. I first met Shelly at TESOL France in Paris last November, and was entranced by her enthusiasm and constant positivity (I mean, has anyone ever seen Shelly NOT smiling???).

I presumed that her optimistic take on life had a lot to do with her Mexican-American background. Now, having read this post about the life-situations of US immigrants and their families, I realise that people like Shelly have a tough time assimilating into US life. There are various reasons for this, which will become clear as you read. 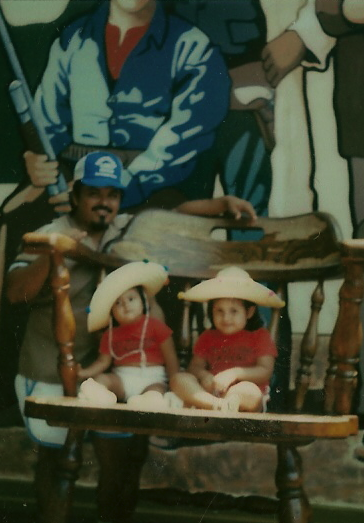 All over the world, countries deal with immigration. For many countries, immigrants are seen as a burden. For some countries, immigrants are seen as a way to increase the population. Immigrants have their own stories and believe me these stories are interesting to hear. I grew up listening to these stories, reading them from books, and listening to the beautiful lyrics and poetry of those who came before me.

In America, many immigrants struggle to break the poverty cycle. The enormous achievement gap and statistics are a reflection of this. In 2005, more than one million immigrants, ages 16 to 24, were reported to be out of school and had not earned a high school diploma or equivalent (Laird, DeBell, Kienzl, & Chapman, 2007). In addition, 83% of Hispanics, between the ages of 18 to 24, who were born in the US, completed high school, whereas, only 56.8% of foreign-born Hispanics, in the same age group, completed high school.

Many of my students, including my English language learners in Germany, are immigrants. I believe many of us will teach English language learners who are either immigrants or who have ancestors who immigrated. These learners not only struggle with the language, they also struggle with assimilation, prejudice, and poverty. My passion for seeing my students achieve is deeply rooted in my own experiences with these demons.

My great grandparents were immigrants and when they left Mexico for America they wanted their children to have better lives. Unfortunately, immigrants will struggle with poverty for many generations. I know, because most of my relatives still struggle with poverty. My four sisters and I graduating from college is an anomaly. We are the first generation to do this and the majority of our cousins have not graduated from college. Many of my relatives live together in one house. This includes the grandparents, parents, and children. For many years, this was the house my grandfather built with his hands. My grandfather recently passed away last February. He was my hero when I was growing up, because he and my grandmother taught me Spanish and are the reasons I studied my heritage.

Texas History and English Only

I would say I grew up with blinders like many children do. I mean I never really understood my heritage or my parents’ reasons for not allowing us to speak Spanish till I went to college. In Texas, where I grew up, our history classes paint Mexico as an enemy. We are taught in our history books that Mexicans are the ones who slaughtered those in the Alamo and Texas fought bloody battles to finally be free from Mexico. My parents raised me to never argue with any of my teachers, because they were always right. They also raised me to never speak Spanish. They never talked about our heritage. We didn’t do tamaladas (traditional tamale-making parties) like the rest of my friends or celebrate Mexican holidays like Dias de Los Muertos.

After the first grade, I was moved from my poor Hispanic neighborhood to a rich school, which ensured I never grew up surrounded by my traditional customs. I was there illegally and I struggled to fit in. I hadn’t realized that in my original neighborhood, I had not learned proper English. We spoke what my Master’s Linguistic class taught me was CHE (Chicano English). Until high school, my friends picked on me about my mispronunciation of sheeken (chicken), shere (chair), libery (library), and sangwich (sandwich).

I used to wonder why my parents forbade us to speak Spanish. I felt I missed out on a huge part of my heritage. In college and high school, I attended the cultural events and was part of Latino student organizations- LULAC, NCLR, and the Hispanic Chamber of Commerce. I took several courses on Mexican American history and Latin music and dances. I studied Spanish from middle school to college. I read as many books as I could on assimilation from various authors such as Americo Paredes, Sandra Cisneros, Julia Alvarez, Amy Tan, Sherman Alexie, and more.

I found out much later that my parents were not allowed to go to school if they spoke Spanish. They were also hit with rulers and sentenced to other punishments. While reading George Washington Gomez by Americo Paredes, I was able to see the atrocities of these laws in Texas. When I was growing up there was still a strong English only policy in schools which was evidenced by the passing of several state propositions where teachers were fired for speaking any other language than English and the ending of several bilingual education programs.

My parents told me they wanted to make sure I had a chance and for that reason I was given an American name like Shelly and not allowed to speak Spanish. Somehow, my parents seemed to do the impossible, they managed to raise all 5 of their children to graduate from college and break the poverty cycle. Therefore, I cannot fault them, but I do feel I missed out and I know many of my friends from immigrant ancestry feel the same about their upbringing.

The US and Immigration

The US has seen a lot of improvement from when my parents attended school. However, minorities continue to be a vast majority of the students who are not achieving academically, failing standardized tests, dropping out of high school, on welfare, and in prisons. Illegal immigrants find it extremely difficult to find any jobs as the government has fined several establishments for hiring any undocumented workers. In 2005, many states passed harsh immigration policies and began to crackdown on illegal immigration. These policies were a cause for the nationwide walk out of thousands of Americans in protest in 2006.

Students without documentation cannot receive any scholarships no matter how well they do in school. Many English language learners are required to stay in an ESL program for many years until they pass the standardized tests in every subject. Even if they excel in one subject, they are still not allowed to advance. For many, this means they will not even receive the credits they need to attend college. Millions of immigrants enter the US each year. In January 2009, the Department of Homeland Security reported there were 10.8 million unauthorized immigrants living in the US with 62 % coming from Mexico. With these statistics, I wonder if the US can really afford to continue to make it nearly impossible for immigrants to find jobs and their children to graduate from college.

How are immigrants treated in your country? What are the immigration policies and how do these impact your English language learners? 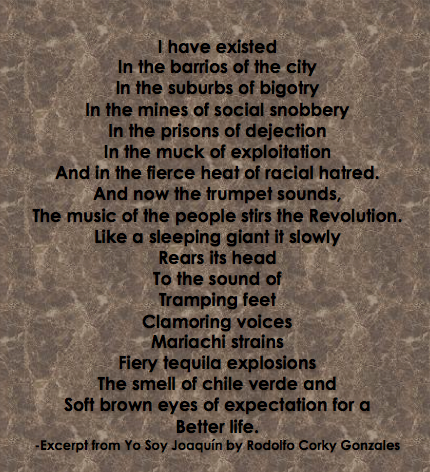 Click here to read the rest of the poem.