Aims       To give students the chance to ask and answer basic personal questions.

No preparation is needed for this activity. It does however require a certain level of trust between the teacher and the students, so it is advisable to try this activity with a class you know well.

1     Ask a student to come to the front of the class. Tell him/her you are going to ask four questions and you want them answered truthfully. Then ask the following simple questions:

What nationality are you?       Italian.

2     Now tell ‘Agnieszka’ that you want her to be someone else. Ask the same four questions and ask her to change the answers to all of them. Don’t give her any time to prepare for this.

3     Now as the rest of the class to ask ‘Monica’ about her life. Tell them to be careful and not ask questions which are too personal. At this point, you can sit down and be part of the class.

4     There is no rule about how long this questioning should go on – some students think of amazing questions and answers. However, when the questioning starts to slow down, ask ‘Monica’ to invite another student to the front of the class and continue the procedure. ‘Monica’ becomes the teacher. She asks the four questions, twice, then she sits down and the questioning begins again.

5     This process can go on for as long or short a time as you think fit. It is worth noting that your role in this activity is minimal, and the focus of the class changes completely

Written homework. Tell the class to choose one of the characters that they heard about, and write a description of what happened. If the class can use reported speech, then encourage them to do it as a report:

We talked to a nurse from Ireland called Monica. She told us that she enjoyed nursing …

If they don’t know how to write reported speech sentences, encourage them to write it as a dialogue.

Natalia: How long have you been a nurse?

1     This activity is self-regulating. See the note about Self-regulating improvisationsin the introduction.

2     Use the same four questions, regardless of the level of the class and regardless of whether the class is monolingual or multilingual and/or multi-nationality. And always ask them to give the real answers first. Of course, the answers to questions 2–4 will be almost identical in a monolingual class living in the same town; this does not matter. Giving the real answers gets the students into the rhythm of the activity and gives them a little thinking time.

3     Do not accept answers to the second set of questions if the students want to be a real person, a pop star or sportsperson, for example. We don’t want questions to Britney Spears or Lewis Hamilton!

4     When a female student is answering the questions about her new self, there is a tendency for the rest of the class to ask if she is married, or in a relationship. There is nothing wrong with that, but the questioning is then sometimes directed entirely towards the partner and what he does. Try to encourage the questioning to be about the student’s new persona, and not other people.

5     Do not worry that you are not giving the students enough preparation time; they will not need it. Even in cultures which are less immediately extrovert, students never fail to come up with a new identity and enter into the spirit of the activity.

2   Actions and locations: where are you and what are you doing?

Aims            To practise the present continuous tense and phone language.

You need two old mobile phones and two cardboard boxes, or similar containers. Mark the boxes ‘A’ for ‘Actions’, and ‘L’ for ‘Locations’. The students need a pen and two pieces of paper.

1       Ask the class to write a location on a piece of paper. What you want is a prepositional phrase. Write on the tableon the board as an example. Encourage them to use different prepositions that they know: in, under,near, opposite, behind, nextto, etc. Ask the class to fold the papers and put them in a cardboard box, marked ‘L’ (Locations).

2       Now ask them to write an action on the other piece of paper. The action needs to be in the present continuous tense, but try not to use explanatory grammatical language when you ask them to do this. Write an example on the board: I’m eating a biscuit. Indicate that the examples should be in the first person, and there should be a verb and an object. Ask the class to fold the papers and put them in the second cardboard box, marked ‘A’ (Actions).

4       You can if you like encourage Student A to ask for more details.

5       Student B now asks Student A the same two questions. Student A takes a piece of paper from each box and reads the contents.

6       The two students then give the mobile phones to two other students, who do exactly the same thing.

This activity can continue, if you wish, until every student in the class has had this mini-conversation. The only argument against allowing everyone to do it is that there may be some written examples that are offensive or illegible, so there may not be enough useable items in the boxes for everyone. See the note on Offensive Languagein the introduction.

Aims     To practise intonation to convey emotion. To energize the group.

No preparation is needed for this activity.

1       Choose five students from the group and ask them to stand in a line.

2       Tell the first student (Student A) in the line to ask the question What time is it? to Student B angrily. Let Student A practise asking the question angrily. Ask the rest of the group if they sound angry enough.

3       Now tell Student B to reply angrily with one word: What? He or she should use rising intonation to indicate that he or she didn’t hear the first time. Let Student A and Student B practise the two lines.

4       Now ask Student A to repeat the question What time is it? This time Student B says I don’t know!Student A finishes the exchange by indicating Student C and saying: Well, ask him / her!

So, the complete dialogue is as follows:

7       Now tell Student D to thank Student E profusely, but only using the words Thank you. Tell him or her to make the Thank youas emphatic as possible.

10     The five members of the first team then choose five more people to stand in a line.

12     Continue until everyone in the group has had a chance to play.

NOTE: You can see an example of What Time Is it here – https://www.youtube.com/watch?v=1uYUDhq22XU&t=192s

When you ask the group to give you a new question for the second or subsequent groups, they may not offer one which ‘works’. It doesn’t matter; accept whatever they say and let the second and subsequent groups try to make it work. For example, if they offer What’s your name?, don’t reject it – let the team try it:

Student A: What’s your name?

Student A: What’s your name?

Student B: I don’t know!

Student A: Well, ask her!

They will soon realize that questions which ask for more general information are the ones which will work.

Aims     To create a series of improvised exchanges.

You need a cardboard box or similar container. Students need a pen and a large piece of paper, which they will cut into three pieces.

1       Tell students to get three small pieces of paper. Tell them that they are going to write three separate conversation items on the pieces of paper. Ask them to write clearly as other people may have to read what they write.

2       Ask them to write a STATEMENT on the first one. Tell them that you want conversation items, e.g. I saw a good TV programme yesterday, notsomething you might hear in a speech, e.g. The main agricultural produce of this country is corn.

3       Ask them to write a QUESTION on the second piece of paper. They may ask if the statement and question should be related, and you can tell them that it doesn’t matter whether it is or not.

4       Ask them to write an EXCLAMATION on the third piece of paper. If they don’t understand what you mean, give an example: Oh no! Tell them not to use the example you give, they must think of another one.

5       Ask them to fold up the three pieces of paper and put them all in the same box. Put the box on a chair or table at the front of the class, and put a chair on either side of it.

Who are these people?

What are they talking about?

The class should come up with a situation that is clear to everyone, e.g.:

They are standing in the street.

They are talking about another neighbour.

8       A good rule is that they should be allowed three lines from the box each. If their conversation becomes absolutely hilarious, allow them to continue. Eventually, thank the pair and ask them to go back to their seats. Ask for two more volunteers. Ask the rest of the class to provide new characters, location and conversation topic for them.

1       There is a potential for activities like this to backfire. For example, in this case, the topic of conversation which is suggested by the rest of the class may be limited, obscure, too personal or potentially offensive. If this is the case, feel free to ask for other suggestions. But, as far as possible, allow the students to provide input without teacher interference.

2       Read the notes about Student suspicionand Students who talk too much in the introduction.

3       Try to discourage the class from shoutingFish! too often.

Aims     To practise structuring sentences in the context of a game.

No preparation is needed for this activity.

1       Put three chairs in front of the class and ask for three volunteers to sit in them.

3       Ask the class to choose a topic that the three students are experts about. The first time, accept simple and easily-understood topics like Food, Films, or Sport. Let’s say you choose Food. Tell the three volunteers that they are now experts about food and they are going to answer questions from the class about this topic. However, it is not quite as straightforward as that. When they answer the questions, they have to do it one word at a time, in sequence. Like this:

4       Invite the rest of the class to ask the experts a question about the chosen topic.

What is the most difficult dish to cook?

What is the healthiest food to eat?

The three experts then try to answer the question. Let them make their answer as long or as short as they like.

5       Let the class ask a maximum of three questions to the experts, then choose three new experts and a new topic for them. Continue the game for as long as you can allow.

The five activities are all from this book: 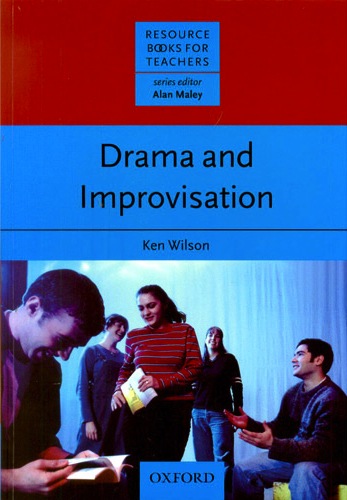